WHAT: WASHINGTON’S REVOLUTION:
The Making of America’s First Leader

WHERE: The author lives in Oakland, CA.

WHY: “A marvelous achievement.
This is not just another account of George Washington’s leadership in the Revolutionary War; it is special. It is perceptive, balanced, judicious, and, most important, clearly and succinctly written.” —Gordon S. Wood

“Middlekauff’s psychological and philosophical approach
adds fresh new details to a time-honored portrait.
“Focusing on George Washington’s significant impact on the course and outcome of the Revolution rather than on his role as America’s first president, Middlekauf details the life and times of both the man and the soldier. Beginning with his formative years, the author charts the course of his remarkable — yet thoughtfully measured—transformation from provincial Virginian to nationalist leader. Comparing the evolution of Washington the man to the fledgling nation, the author is able to capture the collective mindset of a people perched on the precipice of a monumental historical shift. Wrapping up his study at the conclusion of the war, the author portrays Washington, like the nation he represented and fought for, as a
man with an entirely new conception of ‘what freedom meant in a free nation.'”
—Margaret Flanagan, BOOKLIST

“This clearly written study reveals how much of Washington the legend was reflected in the real man.” —PUBLISHERS WEEKLY 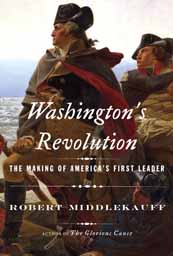 From the beginning of the book:
Long before George Washington’s death, Americans began writing about him in terms resembling the descriptions the New England Puritans had used to describe God. The Puritans never claimed ultimate insight into God’s essence — God, no matter how thoroughly studied, no matter how lovingly worshipped, remained unknown and unknowable. He could be approached, in a manner of speaking, by listing his attributes — his power and justice, for example — but the list could never be more than a beginning, certainly not a full understanding. George Washington, a mere man, was called godlike while still alive — meaning that he had been chosen by Providence to do great things; he was the being created to take the leading role, indeed the essential part, in leading his country out of the British Empire and into the new world of republics.