WHAT: Her authorized biography by Charles Moore

WHY:
“The authorized, remarkably even-handed biography of the grimly divisive, late Iron Lady of Britain.
“Margaret Thatcher (1925–2013), by Fleet Street journalist and debut author Moore’s account, was not one for the examined life. Like her friend Ronald Reagan, she acted and then moved on, stopping only for an occasional moment of self-criticism for, say, not having been better prepared for a Parliamentary question-and-answer session.
“And act she did, introducing schemes of privatization and austerity, busting unions, giving aid and comfort to white apartheid regimes in southern Africa—though, Moore hastens to note, her written reference to a ‘nigger brown’ frock was just a garden-variety expression of the time. One feels for the author, given his subject’s lack of self-reflection and paucity of written records, for Thatcher was no writer save for heavily underlined, exclamatory do-this and do-that directives on pieces of paper handed to her. 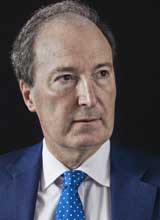 “Nonetheless, Moore acquits himself well in this respectful but certainly not hagiographic account. If it’s not entirely warts-and-all, it reckons with some of the darker aspects of her time in power, including her habit of conducting periodic purges to weed out the ideologically suspect within her ranks, as well as some poor and even possibly criminal decisions, such as the sinking of the Argentine ship Belgrano in the early days of the Falklands War. That Thatcher enjoyed far from universal popular support was clear in the aftermath of her recent death, but Moore is correct to note that the relentlessly self-made, all-controlling leader enjoyed a great boost thanks to the Falklands War, which ‘established [her] personal mastery of the political scene, and convinced people of her special gifts of leadership’.” —KIRKUS, a starred review

Media Resources:
About the book | About the author | Read an excerpt | Praise from the UK | Download the jacket or the author photo