WHAT: REVOLUTIONARY SUMMER:
The Birth of American Independence

WHY:
“The definitive book on the revolutionary events of the summer of 1776.
“If we must have another work on this shop-worn subject, Pulitzer and National Book Award-winner Joseph Ellis is the one to write it. Ellis’s prose is characteristically seductive, his insights frequent, his sketches of people and events captivating, and his critical facility always alive, even when he’s praising Washington and faulting British military strategy.
“Lightly applying what we’ve learned from our own recent wars, Ellis argues that Washington knew what, for example, the North Vietnamese later understood: ‘His goal was not to win the war but rather to not lose it.’ Thanks to Washington’s preservation of the Continental Army, which he accomplished through both sheer luck and brilliant command on Long Island and Manhattan in these critical summer months, the former colonies held on to a chance to win their independence.
“Another brilliantly told story, carried along on solid interpretive grounds, by one of our best historians of the early nation.” —PUBLISHERS WEEKLY, a starred review

Media Resources:
About the book | About the author |  Download the jacket or the author photo| Download an excerpt from the Random House AudioBook 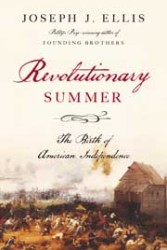