WHAT: FUTURE WAR:
Preparing for the New Global Battlefield

WHERE: The author lives in Alexandria VA.

WHY: “A cautionary and chilling consideration of how wars will be conducted in the near future.
“Cyberspace battles, enhanced soldiers, biological agents, robots — retired U.S. Air Force major general Latiff is leery about potential new combat technologies and how the wars of tomorrow will increasingly be waged with computers. What might the risks and unintended consequences be? Once implemented, can these technologies be completely controlled?
“Latiff views technology as seductive, even addictive, and disposed to glitches and occasional failure. ‘My overall concern with the new technologies is that we are, seemingly with reckless abandon, rushing to incorporate computers, robotics, artificial intelligence, and other automation into ever more human activities, both civil and military.’ He also worries about the influence of politics, money, and strong personalities. One former chairman of the Joint Chiefs of Staff admitted with concern, ‘It’s become just too easy to go to war.’
“Latiff foresees an upsurge of ethical challenges and escalating hubris associated with the use of novel weapons of warfare. He explores ways in which future battles might affect soldiers and examines the disconnect between the military and the public it protects. This is a cautionary and chilling consideration of how wars will be conducted in the near future, and a crucial reminder that there is one aspect of these ‘new’ wars that won’t change: people will still suffer and die.”
–Tony Miksanek, in a starred review for BOOKLIST

“Stimulating. The focus on ethics makes this book an important part of the growing literature related to managing the continuing acceleration of technological development.” –PUBLISHERS WEEKLY 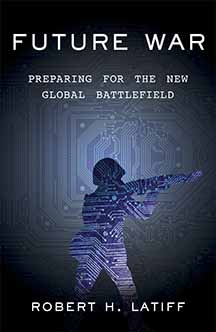 From the beginning of the book:
On a sweltering August day, following weeks of heightened tensions with Russia over its actions in Ukraine and Syria, and harsh words between the United States and China over actions in the South China Sea, and as workers are preparing to depart the cool of their air-conditioned Manhattan office buildings for the gridlocked highways and subways, several large electric power plants along the East Coast simultaneously experience dramatic over-speed conditions in their large turbine motors. Plant operators are unable to stop the steam turbines, whose automatic control and data systems have been infected by sophisticated computer malware, and they catastrophically tear themselves apart, cutting power to large segments of the population and industries in a the Northeast. Building systems shut down, hospitals switch to emergency generators, trains stop running, traffic lights cease operation, and Wall Street trading comes to a halt. At the same time, eleven hundred miles to the south, a massive rocket sits fueled and ready to launch a critical national security satellite, when an explosive-laden private aircraft flies at low altitude into the Cape Canaveral launch area, and, despite repeated warnings, slams into the pressurized fuel tanks and sold rocket motors, creating an enormous conflagration. Half a world away, elite commandoes equipped with the latest high-technology equipment but unidentifiable as a national army attack U.S. and allied interests near areas of disputed territory. Thus are fired the opening shots of a new war.