Posts Tagged ‘Scandal of the Century’

‘Scandal of the Century’ by Gabriel Garcia Marquez

WHAT: THE SCANDAL OF THE CENTURY
and Other Writings

WHERE: The author was born in Colombia.

WHY: “Gabriel Garcia Marquez is discerning, mesmerizing, and provocative.
“Journalism was Nobel laureate García Márquez’s ‘first true love’ as a writer. This ensnaring volume gathers 50 incisive and surprising articles and essays published from 1950 to 1984, a small yet mighty sampling of his extensive nonfiction corpus.
“Here is García Márquez’s mastery of storytelling and sardonic humor, as well as evidence of his embrace of the absurd and the inexplicable and his fluency in offering the telling detail. The title piece is a wry and gripping Felliniesque chronicle of a young woman’s mysterious death in 1953 on an Italian beach, one of many dispatches García Márquez wrote for a Bogotá paper after being sent abroad to evade the trouble his reporting sometimes catalyzed.
“No subject was too humble, so deep was his curiosity about life, though his was truly a global perspective. ‘The World’s Most Famous Year’ juxtaposes an array of 1957 events, including Humphrey Bogart’s funeral and the banning of rock ‘n’ roll on Cuban television. Other pieces examine paradoxes in Caracas, a Sandinista operation, and life in Mexico. Whatever his focus, García Márquez is discerning, mesmerizing, and provocative, his timeless journalism works of art and dissent.”
—Donna Seaman, BOOKLIST

“An eye-opening collection…eclectic and transportive.
Garcia Marquez fans will welcome these fresh and lively examples of his beautiful, lyrical writing.” —KIRKUS, starred review 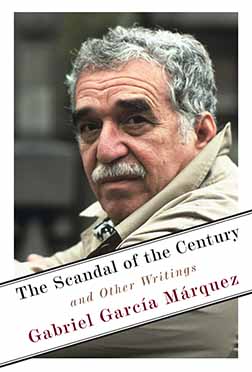