WHAT: THE NARROW ROAD TO THE DEEP NORTH, a novel 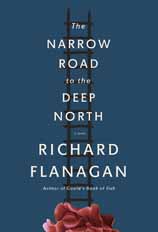