WHAT: THE SAKURA OBSESSION:
The Incredible Story of the Plant Hunter Who Saved Japan’s Cherry Blossoms

WHY: “This charming book shows how indebted the world is to one man for his work in creating a shared treasure for all to enjoy.
“The story of the connection that linked one man, one flower, and two countries. Lovers of the outdoors, especially gardeners, will find much to enjoy in Japanese journalist Naoko Abe’s first English-language book. She engagingly chronicles the travels and plant-collecting adventures of Collingwood Ingram (1880-1981).
“The Englishman, born to wealth in Victorian times, spent his sickly youth wandering the countryside, where he developed a passion for birds. In 1902, he traveled to Japan to see the birds there, which were similar to England’s, and was swept up by the beauty of the country; the young man vowed to return. After World War I, he gradually lost interest in ornithology but began an obsession with horticulture, spurred by his family’s move to Kent in 1919. On the property, he found two magnificent flowering Japanese cherry trees, leading him to a long life of discovering, preserving, breeding, grafting, and sharing rare varieties.
“Interspersed throughout the book are pieces of Japan’s history over the last 2,000 years… The author clearly shows the national importance of the cherry tree and how its perception changed with Westernization. Abe’s statement that Japan is and was the world’s most artistic nation is exemplified by the 250 varieties of cherry tree developed during that era. In the 1920s, as Japan nationalized and modernized, the importance of reviving failing cherry trees was forgotten; there was no money, urgency, or political will to save them. Thanks to the enterprising work of Ingram, however, ‘they bloomed around the world, in arboretums and parks, along city streets and riverbanks and in millions of suburban gardens. Indeed, writes the author, ‘Ingram had helped to change the face of spring.'” –KIRKUS REVIEWS

A stone’s throw from the western moat of the Imperial Palace in Tokyo, a future King of England thrust a shiny new shovel into the cold, wet soil. Peering at the thin trunk of the young cherry tree he had just planted in the British Embassy compound, Prince William smiled at his entourage.

The tree-planting ceremony in late February 2015 was just another ritual for the 32-year-old prince on his first visit to Japan, hours after meeting Emperor Akihito and Empress Michiko in their sequestered quarters within the moat. Unusually, the star of this occasion was the tree itself.

This 10-foot-tall plant was no ordinary variety of cherry tree. Taihaku, or “Great White,” was a rare and spectacular tree, lauded by purists for its large, single white owers. At one time Taihaku became extinct in Japan. And its unlikely revival, in a nation where cherry trees are an omnipresent and enduring symbol, was due to one man — an Englishman no less, Collingwood “Cherry” Ingram. 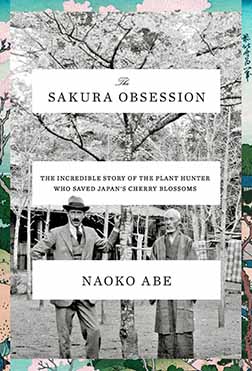