WHAT: BALANCING ACTS:
Behind the Scenes at London’s National Theatre

WHY: “Well done, Sir Nicholas!
An unqualified rave for this book.
“London’s Royal National Theatre, comprised of the venue triumvirate of the Olivier, Lyttelton, and Dorfman (formerly Cottesloe) Theatres, boasts a lineage of theatrical royalty. Sir Lawrence Olivier and Sir Peter Hall served as artistic directors of the National; Hytner’s 12-year tenure saw unprecedented growth in audience development and artistic expression, success that has distinguished the National since 1963.
“This exquisitely written memoir of Hytner’s time running the National (2003-15), when he produced more than 100 new plays, is a revelatory exegesis of finding balance at all levels of artistic, technical, philosophical, and commercial productions. The pages sparkle with luminaries with whom the author has worked, including Maggie Smith, Helen Mirren, Kenneth Branagh, Alan Bennet, Daniel Day-Lewis, Tom Stoppard, and Harold Pinter. The elements Hytner so adroitly strived for in his stewardship of the National is manifested throughout this memoir — the importance of new play development and classical, especially Shakespearean, theater; weighing working in film vs. theater; the relationship of producer with director, producer with playwright, producer as director with actor; and the precarious calibration of artistic and commercial achievement.
“The theater crowd is the obvious audience for this book but the intelligence, wit, and humor throughout expands the scope of readership to anyone interested in the arts.”
–Barry X. Miller, LIBRARY JOURNAL

“A witty memoir.
A pleasant peek behind the scenes during a transformative period of British theater history.” –KIRKUS REVIEWS 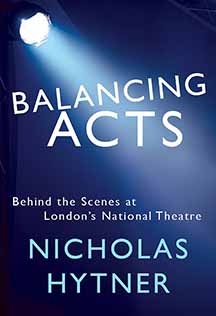 From the beginning of the book:
At university, I realized I couldn’t write and I couldn’t act. I could time a laugh, though not always appropriately. As a tyrannical general in The Queen and the Rebels, an intense play by Ugo Betti, I brought the house down, to the despair of the director. There were legions of mediocre writers and actors in Cambridge, eager to insert themselves into the student theatre scene by calling themselves directors. That’s all you had to do: call yourself a director. Drama wasn’t on the curriculum, so the undergraduates had it to themselves, which may be why so many of them have thrived in the professional theater. If you had to the nerve, you pitched an idea to a committee of your fellow students, and you hustled them into giving you a show. The happy few were given a giant Meccano set.