WHERE: Set in Montana.

WHY: “Seventeen stories that cement McGuane’s reputation as the finest writer of Big Sky country–and, at his best, beyond.
“McGuane writes beautifully about the wilderness but always with an eye on its destructive power. As with much of his recent fiction, most of the stories here are set in Montana and turn on relationships going bust. In ‘Hubcaps,’ a young boy observes his parents’ breakup through the filter of baseball and football games, capturing the protagonist’s slowly emerging resentment; in ‘Lake Story,’ a man’s long-running affair with a married woman collapses during an ill-advised public outing, exposing the thinness of the connections that united them; in ‘Canyon Ferry,’ a divorced dad’s attempt to prove his intrepidness to his young son during an ice-fishing trip pushes them to the edge of disaster during a storm.
“One of the best stories in the collection, ‘River Camp,’ displays McGuane’s skill at pairing emotional turmoil with the untamed outdoors, following two brothers-in-law whose attempt to get away from it all leads them to a tour guide of questionable mental stability, bears rustling through tents and plenty of exposed raw nerves about their marriages. ‘Stars’ tells a similar story in a more interior mode, following an astronomer who increasingly fails to contain her anger at the workaday world—McGuane skillfully depicts the small but constant ways life goes off-plumb for her—and how she fumbles toward balance in the forest.
“The conflicts throughout this book are age-old—indeed, the title story evokes ‘Oedipus’—but McGuane’s clean writing and psychological acuity enliven them all. A slyly cutting batch of tales from a contemporary master.” —KIRKUS, a starred review

“Funny, sad, and awful, awfully human. McGuane’s stories highlight the detachment of young from old, husband from wife, neighbor from neighbor, the dying from life itself.”
—PUBLISHERS WEEKLY, a featured, starred review

“Glum, gleeful, brilliant. McGuane’s stories are about the whacked-out order men and women assign to things, but it’s not the true order and merely contributes to a larger confusion that is not far from horror.” —John Mort, in a starred review for BOOKLIST

“A compelling and emotionally charged collection.”
—John Mort, in a starred review for BOOKLIST 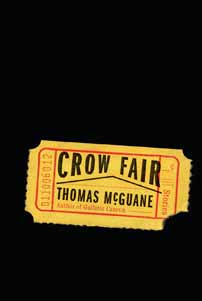 From the beginning of the book:
I picked up my father on a sultry morning with heavy, rumbling clouds on the horizon. My mother had thrown him out again, this time for his weight. She’d said that he was insufficiently committed to his weight-loss journey and that if he hit two-fifty she wouldn’t live with him anymore. She seemed to know he’d be heading my way: I had been getting obesity-cure solicitations over the phone, my number doubtless supplied by her. I was tired of explaining to strangers that I wasn’t fat and of being told that a lot of fat people don’t realize how fat they are or wrongly assume that they can do something about it on their own, without paying.