WHAT: INVISIBLE AMERICANS:
The Tragic Cost of Child Poverty

WHY: “A simple solution to the complex problem of child poverty…A useful book that reveals what might be considered a secret shame but that is hiding in plain sight.
“Jeff Madrick builds a strong case that child poverty in America is ‘moral tragedy,’ with as many as 25% of American children suffering from such deprivation. He systematically traces the cycle, beginning with prenatal care (or lack thereof) and continuing through food and housing insecurities, economically segregated schools with substandard resources, and poor employment prospects.
“If our economic policies are keeping such a large percentage of children in such a cycle of poverty, why does society permit it? Because we don’t agree on the severity of the problem or where the poverty line should be set. We don’t agree on whose fault it is, often blaming the poor for bad habits, little initiative, and a tendency to have children they can’t support. In other words, the ‘culture of poverty,’ which Madrick attacks forcefully, particularly in regard to the black community.
“‘Ideological battles over the origins of poverty,’ writes the author, ‘are not an abstraction—they have consequences for the poor, for policy and for a way that Americans understand who is to blame for poverty.’ We have Social Security to help keep older citizens out of poverty; we need something similar for the young. ‘I believe,’ writes Madrick, ‘we should provide monthly, substantial, and unconditional cash allowances for all children through disbursements to their families.'” —KIRKUS REVIEWS

“With passionate advocacy, Madrick addresses a systemic problem with a simple solution. He dispels poverty myths created during the Reagan and Clinton administrations, reinforcing that cash allowances positively impact a child’s welfare whereas cutting funds increases the likelihood that a child will fail to thrive without reducing poverty significantly.” —Angela Forret, LIBRARY JOURNAL 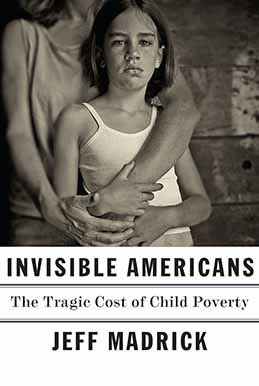