“How Have I Not Read This?” September Book Club Pick 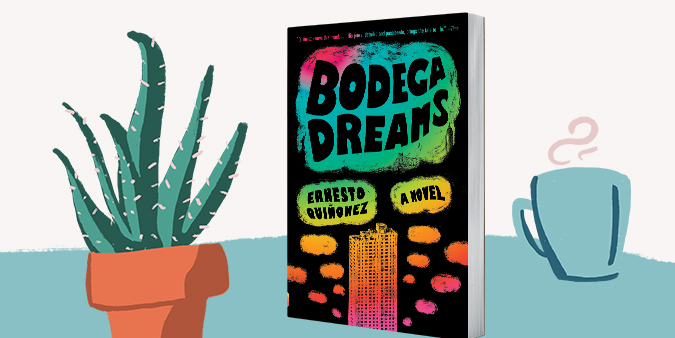 Join author Ernesto Quiñonez in conversation with Juan Gonzales from Democracy Now! during Latinx Heritage Month for a live, virtual discussion celebrating the 20th Anniversary of his novel Bodega Dreams.

Published to acclaim in 2000, Ernesto Quiñonez’s Bodega Dreams was later hailed by The New York Times as a “new immigrant classic.” In a stunning narrative combining the gritty rhythms of Junot Diaz with the noir genius of Walter Mosley, Bodega Dreams pulls us into Spanish Harlem, where the word is out: Willie Bodega is king. Need college tuition for your daughter? Start-up funds for your fruit stand? Bodega can help. He gives everyone a leg up, in exchange only for loyalty—and a steady income from the drugs he pushes. Lyrical, inspired, and darkly funny, this powerful novel brilliantly evokes the trial of Chino, a smart, promising young man to whom Bodega turns for a favor. Chino is drawn to Bodega’s street-smart idealism, but soon finds himself over his head, navigating an underworld of switchblade tempers, turncoat morality, and murder.

• Hosted in partnership with the Bronx’s The Lit. Bar. You can order Bodega Dreams or El vendedor de sueños from them HERE.

ERNESTO QUIÑONEZ was born in Ecuador, but arrived to New York City he was eighteen months old and was raised in El Barrio, East Harlem. Quiñonez is also the author of Taina and Chango’s Fire. Quiñonez is an Associate Professor at Cornell University, where he teaches Creative Writing, Latino Fiction and Magical Realism, among others.

For more than forty years, JUAN GONZÁLEZ has been a nationally known journalist, social activist and public intellectual. A staff columnist for New York’s Daily News from 1987 until his retirement from the paper in 2016, for the past twenty-four years he has co-hosted Democracy Now! His numerous honors include two George Polk awards and a Leadership Award from the National Hispanic Heritage Foundation. He is also the author of five books, including the classic Harvest of Empire: A History of Latinos in America. Born in Ponce, Puerto Rico, he was raised in East Harlem and Brooklyn. He currently serves as the Richard D. Heffner Professor of Communications and Public Policy at Rutgers University.